The Origins of a Coach: A Brief History

Back to all Blogs
Let's trace the history of coaching and how it's evolved over time—from background corporate roles to becoming a crucial part of modern business culture.

Since its inception, the world of coaching—particularly business coaching—has changed radically. While it’s true that many coaches have been around for hundreds of years, the way we use them has changed dramatically over time. What was once a fringe activity is now a multi-billion dollar industry. And while the reasons for coaching have changed over time, one thing has stayed the same: people need help getting unstuck and moving forward in their lives.

In this blog, we’ll trace the history of coaching and how it has evolved over time. We’ll also consider how business coaches have changed with the times—moving from background roles to becoming a crucial part of modern business culture.

Coaching as we know it today is a relatively new phenomenon, but the idea of training people to be better at their jobs has been around for hundreds of years. In fact, Aristotle was one of the first coaches in recorded history! His book The Art of Rhetoric taught people how to make effective arguments and gave them tools with which they could improve their speaking skills.

The ancient Greeks also had a word for the practice of training people to become better at their jobs: “Paideia.” The term referred to the education and training in ethics, morals and values that were seen as essential for anyone who wanted to be considered an adult.

Modern-day coaches often use the term “Paideia” to describe what they do. They help people become better at their jobs by teaching them how to perform tasks more efficiently and effectively. The idea behind coaching is that if you know how to do something, you can teach someone else how to do it too.

The idea of coaching began as a series of one-on-one conversations between managers and their employees, where they would discuss the latter’s goals and how best to achieve them. Early coaches were often psychologists or psychiatrists with expertise in human behaviour; they helped their clients develop new skills and overcome mental blocks that were preventing them from reaching their potential.

This era saw the rise of a new form of coaching: personal development. Psychologists such as Freud and Jung became famous for their work with patients, helping them uncover what was holding them back from achieving their goals. In the 1960s, Abraham Maslow developed his Hierarchy of Needs theory of psychology, which stated that people had specific needs they had to fulfil before they could be happy or successful in life.

This was also a time when people were more likely to take responsibility for their own success. The era was marked by a slow shift from an agricultural economy to an industrial one, which put more emphasis on individual initiative and self-reliance. This was especially true in the United States, where this change had been occurring for several decades prior to World War II—and it continued after the war as well.

The 1960s and 1970s were marked by a shift from an industrial economy to a more information-based one. This period was also marked by cultural movements that emphasized individual expression and freedom of choice.

The idea that a coach could help you achieve your goals was popularized by sportspeople in the 1970s and 1980s. Olympic athletes who trained with coaches were seen as the best in the world, and many people wanted to know how they did it.

But it wasn’t just athletes who were using coaches to get things done. Soon, people outside of the sports world began to see them as valuable resources for achieving success in their own lives and businesses.

People became more interested in understanding themselves on an internal level—which led to increased self-reflection, introspection, and personal growth.

It was also a time when companies were moving away from traditional hierarchical structures and creating flatter organizations with more responsibility for employees. The notion of coaching helped people adapt to these changes by teaching them how to think creatively, make decisions more effectively, solve problems collaboratively—and ultimately succeed in their jobs.

This paradigm shift made books like The Inner Game of Tennis (1974) by Timothy Gallwey became popular because they provided a framework for improving performance by focusing on internal states rather than external factors.

They began to focus on helping people achieve their goals and live fuller lives. This movement led to the development of the coaching profession and was a precursor to current trends in leadership development, personal growth, and executive coaching.

And, of course, this was the beginning of what we now call life coaching. Coaching in this area focuses on helping clients figure out what they want from their lives, how to get there, and then holding them accountable for making it happen—with accountability often taking the form of a contract between coach and client.

The 1990s were a time of massive change in the coaching world. As personal development became even more popular, coaches began to focus on helping clients improve their lives and achieve their goals in more than just one area. In other words, they stopped focusing solely on career issues and started working with people on a variety of issues—including career, but also family, relationships, health and fitness, spirituality, and religion.

The results were profound, and the coaching industry has never looked back. Today, there’s a coach for just about every type of problem. From weight loss to financial management to relationship issues and more, if you need help with something in your life—and are willing to pay someone else for their expertise—there’s probably a coach out there who can help you out.

The coaching industry has exploded in recent years, and it’s not hard to understand why. Coaching provides a valuable service by helping people take control of their lives, overcome obstacles, and achieve goals they might otherwise have been unable to reach on their own. And as the world becomes more complex—and more competitive—the need for coaching will only increase.

Today, business coaches are a critical part of many people’s success in the corporate world—and even beyond that. They can help you set goals, manage your time effectively, increase your productivity and more—all of which will help improve your performance at work and make it easier for you to achieve success in the long run.

The best part about business coaching is that it’s not exclusive to CEOs and other high-level executives—it’s available to anyone who needs it. Whether you’re just starting out in your career or have been working for years, there are many benefits that can be gained from hiring a business coach.

Especially now that the Fourth Industrial Revolution is upon us, it’s more important than ever to have a mentor who can guide you through the changes that are happening in your industry. Business coaching can help you to stay on top of the latest trends and developments in your industry while also giving you the tools and strategies that will allow you to succeed in every aspect of your business.

With technology continuing to change how we do things, it’s even more important than ever to have someone who can help you stay abreast of everything going on in your field while also giving you the tools and strategies that will allow you to succeed in every aspect of your business.

As the world continues to become more technologically advanced, people are finding ways to make life easier and more convenient. Businesses will continue to grow and expand as a result of this need for convenience, which means that there will be greater demand for business coaches in the future.

As the need for business coaches increases, more people will enter the profession. This means that there’ll be more competition in the market, and it could be harder to find clients who are looking for someone with the specific skills and expertise they need. However, the increase in competition can also be seen as an opportunity because it means that there will be more opportunities for coaches to grow their businesses if they’re willing to put in the time and effort required to do so.

But make no mistake: this is an exciting time to be a business coach. People are looking for ways to make their lives easier, and they realize that technology can’t do everything for them; in fact, it may not even help them at all. Instead, they realize that they need someone who can guide them through the process of growing their business and making sure that it stays on track!

At the end of the day

Here’s what you need to remember about business coaching: it’s changing as steadily and rapidly as ever. What started out as support and guidance for individuals has evolved into much more. Coaching has settled comfortably into many areas, including sports teams, schools, and corporations. There’s no telling how much it will evolve in the future, but one thing is for sure: it’s here to stay.

But it’s important to remember that it all started with one person helping another. There’s no doubt that coaching will continue to be a part of our lives, even if we can’t see where it’ll go next! 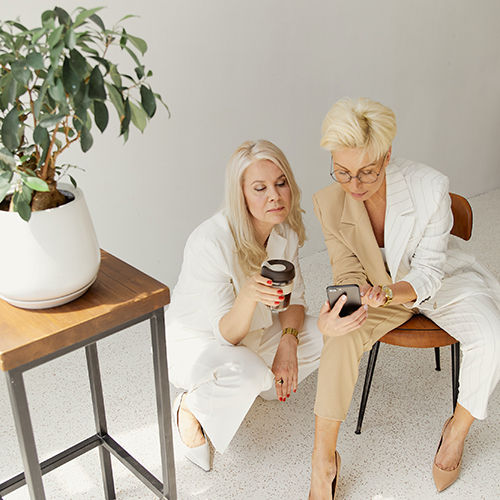 Are you a coach who’s hesitant to start or grow your social media presence? These seven tips will help you get started without feeling overwhelmed.

6 Steps on Courage in Business for Business Coaches

Unlock the confidence that your clients need to succeed in business with help from a business coach. Discover practical ways to develop this essential trait, and start paving their way towards greater success.

Become a positive force in the life of your clients by consistently demonstrating leadership qualities—and these seven qualities will point you in the right direction.

What Type of Coach Are You?